No-one does immersive dining quite like our friends at Gingerline, and The Grand Expedition was their most elaborate and adventurous dinner to date. As with all of their experiences, they came to us with an ambitious brief: to light a multi-media dining experience in the fashion of a Victorian adventure expedition – think Phileas Fogg and Around the World in Eighty Days.

We were immediately captivated by the idea, which would fuse a five-course meal with live performance with audio-visual effects, projected animations and hot air balloons… all within an old disused industrial building in Tottenham Hale. Our job was to help bring this fantastical children’s-book inspired world to life in the most creative way possible.

Working closely with the set designers, we set out to create a lighting scheme that really brought the idea of the hot air balloon to life. With multiple baskets in which diners would sit for the experience, we wanted to focus on the balloon itself – but there wasn’t space for one large single balloon over each basket, so instead we came up with the idea of clusters gathered both above each table, accompanied by smaller hurricane lanterns suspended on ropes and along the walkways between them.

Each balloon was fitted with RGBWW lighting to give us a full range of colours – everything from pigment-rich shades to pastel hues. We then mapped the lanterns which would allow us to programme them as one set of lights, while still knowing the location of each individual lantern so we could run special effects, such as a gentle flickering light for background ambience, switching to a faster, fiery pattern to create that ‘whoosh’ moment of take-off. We also made sure that the set lighting created a gentle glow underneath the staging, to help create the illusion that the baskets were floating.

Ordinarily, the blank-space of an empty warehouse would be a lighting designer’s dream, allowing plenty of space to work with. However, this particular set presented a real challenge: the circular walls of the space were all to be projected on, creating a 360º moving animation that transported diners around the world to Japan, Russia, Brazil and even – the dessert grand finale – to the moon. This not only meant that we needed to design distinct lighting schemes for each location (including a magical deep violet for the moon landing!) but that we also had to rig the kit creatively to ensure they did not interrupt the projections and disrupt the illusion, effectively reducing the space we had to rig within. We also had to ensure the lighting was not disrupted by the ambient light levels from the moving projections.

We successfully tackled the challenge by using 3D visualisation software to create a virtual lighting rig in advance of installation. Even so, once the build began and choreographers saw the space, we had to adapt our plans further to allow space for the live action in among the baskets and walkways. We did this by using lots of small, discreet lighting fixtures known as birdies. Last but not least, we also armed the performers with the ability to manually trigger some of the lighting fixtures as part of their choreography, further bringing the immersive spectacle to life. 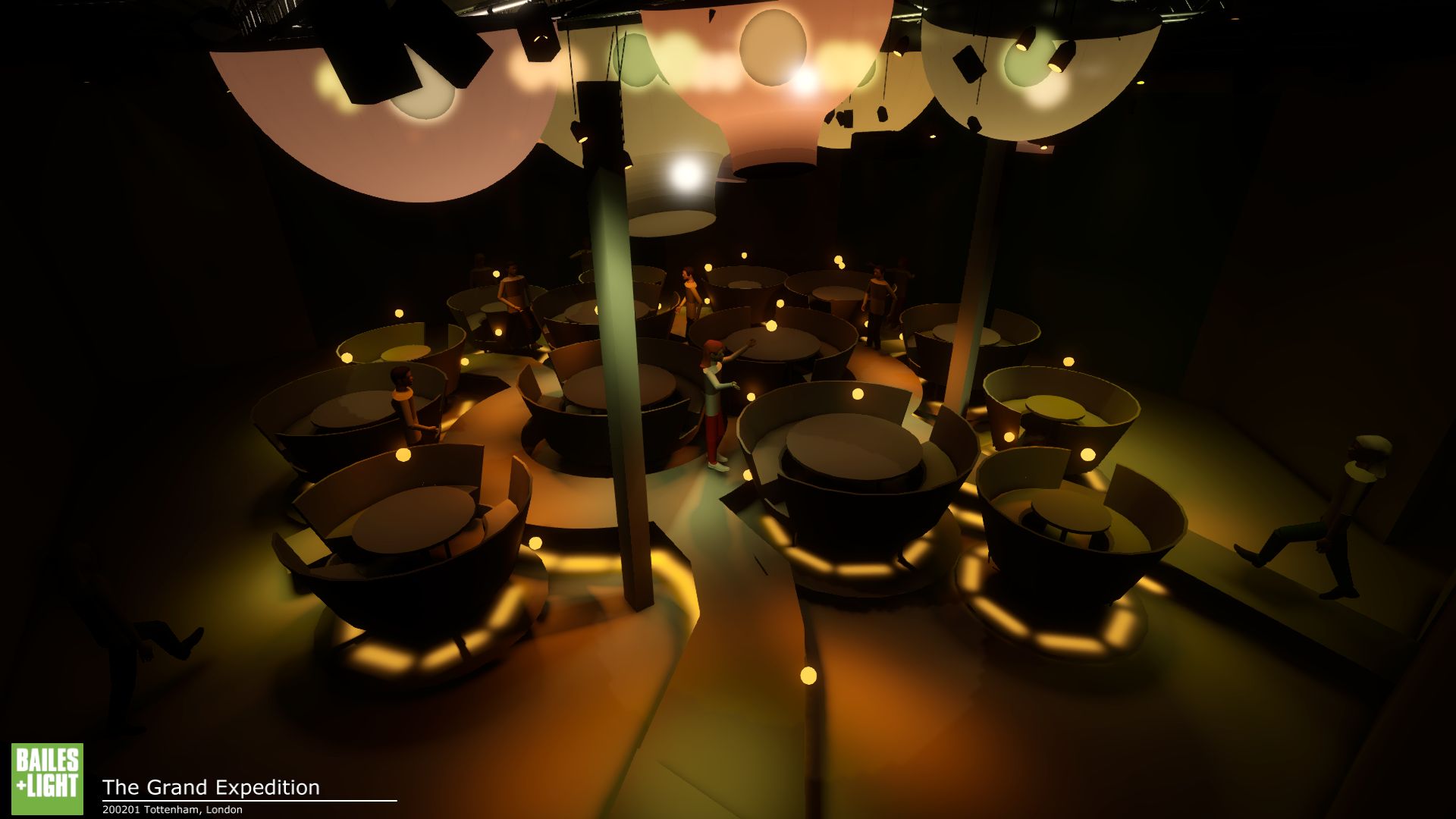 A 3D render of the installation. We used a visualiser and lighting console to program parts of the show off-site.

Seeing the final event come together was magical – as the five star review on The Londonist put it: “It’s a ‘journey’ but unlike last season’s promenade Chambers of Flavour you sit tight and the world comes to you: with technically excellent 360º projection and sound, and some smart and crisp choreography from the passionate cast, it’s a truly enjoyable, immersive and all-enveloping evening.”